VIENNA, Va. – The Financial Crimes Enforcement Network (FinCEN) today released an analysis of Mortgage Fraud SAR Filings in Calendar Year 2012. FinCEN’s data on suspected mortgage fraud shows that reports declined 25 percent in 2012 (from 92,561 to 69,277) as compared to the previous year. The past three years of suspected mortgage fraud suspicious activity reports (SARs), if counted by the date they were received by FinCEN, accounted for approximately 46 percent of the past decade’s mortgage fraud SARs. However, suspicious activity is often only recognized and reported years after loan origination, after a review of origination documents is prompted by a loan default, repurchase demand, or other factors. As a result, many mortgage fraud SARs are filed much later than the date that the suspicious activity actually began. Thus in 2012, 57 percent of SARs received reported mortgage loan fraud (MLF) activities that started more than 5 years before the SAR was filed.

The bulk of FinCEN’s MLF SARs, regardless of filing date, reference suspicious activity that filers believe began in calendar years 2006 and 2007. The following chart depicts the number of annual mortgage fraud SAR filings based on the year FinCEN received the SAR, versus the year that the SAR filer believed the suspicious activity actually began (which was usually at loan origination). It shows that there was an extraordinary concentration of suspicious mortgage origination activity beginning in 2006 and 2007, the years immediately preceding the financial crisis of 2008. 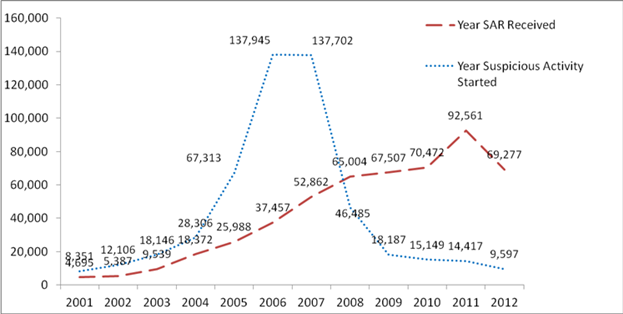 FinCEN's mission is to safeguard the financial system from illicit use and combat money laundering and promote national security through the collection, analysis, and dissemination of financial intelligence and strategic use of financial authorities.
Financial Institution
Mortgage Co/Broker